Fountain of Tears Against Mountain of Fears Fasting Prayer (Jer. 9:1,10 - based) 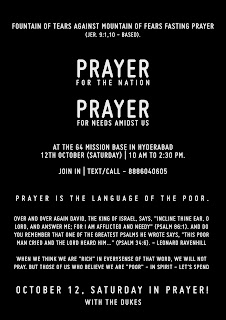 Prayer for the Nation

Prayer for Needs Amidst Us

Prayer is the language of the poor. Over and over again David, the King of Israel, says, "Incline Thine ear, O Lord, and answer me; for I am afflicted and needy" (Psalm 86:1). And do you remember that one of the greatest psalms he wrote says, "This poor man cried and the Lord heard him..." (Psalm 34:6). - Leonard Ravenhill

When we think we are "rich" in everysense of that word, we will not pray. But those of us who believe we are "poor" - in spirit - let's spend October 12, Saturday in prayer!

Event Invite design by our volunteer Joel Joseph.
Posted by G-4 Mission at 10:21 PM No comments:

BOOK OF JUDE STUDY FOR COOL GOOGLE DUDES BY DUKE!

Here is a report of that event along with pictures: 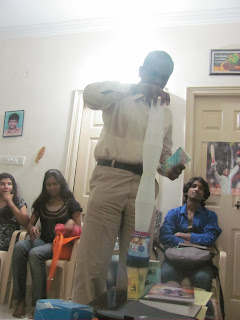 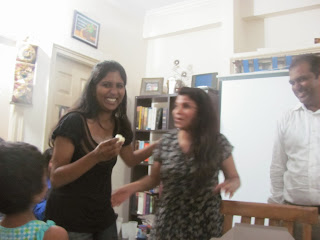 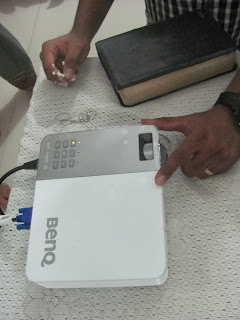 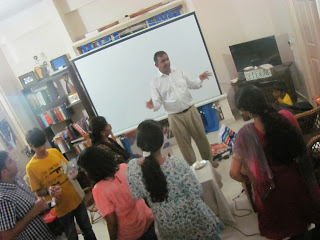 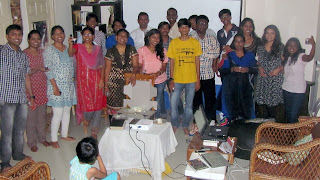 The book of Jude studied. It was 60th different Bible Book summarized by Duke to small groups - a process that started from September 2007. A bunch of Google Genners present - from Amazon, from Infosys, from Deloitte, from Convergys, etc. At the Grabbing the Google Generation from Gehenna Mission's rented base in Hyd (www.facebook.com/googlduke). The Book of Jude summary Bible Study with special reference to hyper grace false teaching - one of most popular false teachings embraced by Google Genners worldwide. God blessed the study. Wrong ideas were rooted out. Biblical ideas were planted. Hearts strangely were warmed. The message preached is now online. On Youtube (video):
The Book of Jude:Hallmarks of Hyper Grace Preachers & How We Should Be Unlike Them!
On Wordpress.com (raw outline & notes): http://freshbiblestudy.wordpress.com/2013/09/02/book-of-jude-for-google-generation-hallmarks-of-hypergrace-preachers-how-we-should-be-unlike-them/. On SoundCloud (audio): https://soundcloud.com/shoutaloud/the-book-of-jude-hallmarks-of.Listen. Share. Rehearse. Tweet about it. FB it.

We had a fun game that drove home this lesson before the study began: the wider the (Bible) base, the taller the (spiritual) building can be built!

We gave a farewell to Preeti Iona, a young woman among the Bible Study group who was leaving for the U.S. to study God's Word. Preeti Iona was a key volunteer who would lead worship during our Bible Studies.

We dedicated for God's glory the Benq GP10 projector which G4 Mission was able to buy - thanks to the generous giving of an Indian donor. This device would help serve us to project songs and Bible Teaching material to those who come for our Ministry events at our base!
The next Bible Study is slated for October 6th, 2013.
Posted by G-4 Mission at 6:18 AM No comments: 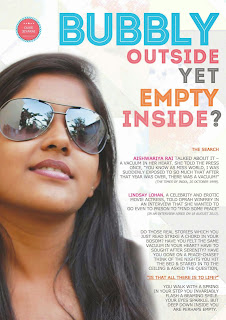 G4 Mission's (www.facebook.com/googleduke) updated 4-page Gospel tract written by Duke for the Google Gen, with color first page and last page is not only online but also printed.

Is there any purpose in my life? Is there any meaning to it? Will sex, money, fame give my life purpose? Is that all there is, to life? What happens after death? These are questions that YOU yourself asked as you hugged your pillow in your bedroom. These are questions which will not switch off from your mind, even as you switch off your bed-room lights. Duke Jeyaraj, answers these questions using Bible truth in this tract. Interestingly, he wraps the answers around contemporary events, movies, He refers to people/events like Boris Becker, Jiah Khan, Charles Spurgeon, Max Lucado, Boris Becker, Makkhi, Naan Ee, The Attacks of 26/11, Ram Gopal Verma, Dhoni, Tendulkar, World Cup Final 2011, 26/11 Mumbai Terrorist attack, Kasab, Tukaram Omble, Michael Schumacher, etc.

Duke Jeyaraj wrote the first version of this gospel tract for the use of the Google Gen youth group he led as a AG Pastor in New Delhi for them to distribute in Ansal Plaza in 2001. After he founded Grabbing the Google Generation from Grabbing De Google Generation 4m Gehenna Mission, a ministry to presentday people in 2006, he updated that tract and printed it. He does this from time to time. This tract has undergone multiple-printings. This edition is the 2013 edition. The volunteers of this ministry distribute this tract to Google Generation hangouts in Hyderabad. Log onto www.facebook.com/googleduke to know more about Duke and the G4 Mission. Or you could write to Duke at duke@aol.in. Or log into www.googlegeneration.in

Here is the link for this tract:

This tract can be read as blog at http://www.purposespot.blogspot.in/ as well. Our volunteer Florussel manages this for us.

Price of this tract is Rs.5/- per tract to send to Indian addresses. Minimum order - 50 tracts. Please use bank info found at http://www.googlegeneration.in/donate.php
For overseas address the tract becomes Rs.20/- each. Minimum order - 50/-
Posted by G-4 Mission at 3:31 AM No comments: