“WHAT YOU PREACH WILL SURELY HELP PEOPLE TO COME OUT OF THEIR SECRET SINS!”

Testimonies of encouragement that Duke and Evan have received off late

Duke Anna, The acronym ‘Numbers’ you used to outline the message of the book of Numbers - I listened to such a thing for the first time. – A Young Man working with Dell

Uncle Duke, now you are my inspiration for everything.....Never knew that you were so realistic..... That's really great.....

- Two comments by two young people after they read Duke’s article, “How I Met And Married My Wife!” which is part of his book, STRAIGHT TALK, on FaceBook.

Thanks Brother Duke. The poems were so creative and insightful that I felt inspired to circulate to everyone in my mailing list (by God's grace about 2000 including some outside Christian faith) after doing some slight value addition (addition of relevant pics) . I have incorporated one part of your 3 WC related poems in my essay on the WC triumph. – A writer of repute living in Hyderabad

Dear Brother Duke, All glory to Jesus that He has anointed you to deliver his messages that are very much pressingly relevant these days. The topics many preachers do not dare to even think about, the topics many fail to address, you preach those very topics to the crowd frankly! It will help many people surely to come out of their secret sins and be a useful in hands of the Saviour. – A viewer of Duke’s message clips on sex, love, marriage and more on Youtube.com

I came with a heavy burden for the Bible Study meeting at your base. Now everything has gone away. God spoke to me through each and every word you spoke today. I also had severe stomach pain while on the way. God healed that pain. I am totally okay. – A Young Man working for a corporate company in Hyderabad

Duke, We are always blessed by your messages - especially the ones related to the Cricket World Cup:) – an Indian young couple living in the US

Duke, It is amazing to see the way God is using you and Evangeline. Sometimes it makes me very proud that I know you personally. - a postdoctoral research scholar of Indian origin in the US

Duke, After seeing your programs on YouTube in the Islamic Nation I work in, the locals allow us to have prayer in our project work premises! – A YouTube Viewer writing-in from an Islamic Nation

Duke, I listened to the DVD of yours with the message on Relationships with one’s parents, patrons, peers and pair. Liked all the examples you have quoted in that message. You have the anointing to be able to link it so well! This message will fit our topic on relationships in the Value Education curriculum of the School I teach in. – a volunteer Teacher writing in from an Indian city.

Dear Evangelin Akka, Your article, 'Are you desperate for a miracle?' was amazing. – a college student from Chennai

Dear Sister Evan, I was there for that message and I tell you that it was an amazing one! A life transforming one and I think you should give more messages like that! – A college principal in Hyderabad who listened to Evan speak the message, FROM REJECT TO A MAGNET, shared with the women of the New Life AG Church, Hyderabad, March 2011 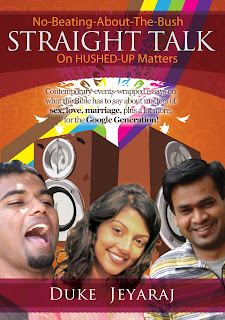 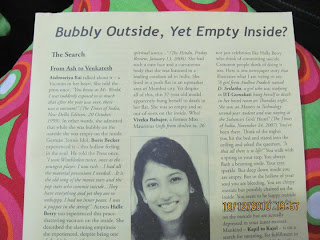 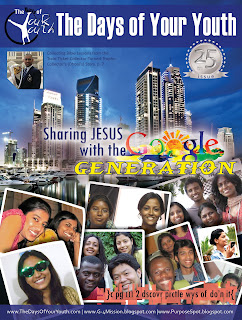 WHAT'S THE CONNECTION BETWEEN THE MOVIE, 'ZINDAGI NA MILEGI DOBARA' AND DUKE'S MESSAGES IN GUJARAT?

A Ministry Report of August 2011 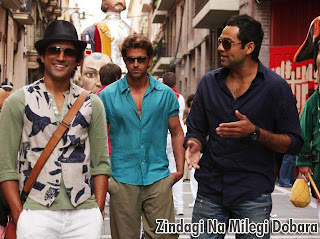 Duke Jeyaraj was invited by Rev. Younus Samuel and Bro. Milton to speak in the Youth Alive event of the New Life AG Church called, 'God of the City' in Hyderabad. Duke preached two conscience-awakening, concise, captivating, messages in this day-long event on August 13th, 2011, for which Brother Edward Kuntam was the other speaker. The first message was titled, 'REPENT, LEST YOU BE SWEPT ALONG WITH SODOM' (a salvation call that saw 30 youth come forward). The second message was titled, 'STAYING AS SALT IN YOUR SODOM' (after this message, youth from various colleges came forward vowing to start Prayer Cells in their colleges). On August 15th, some young people who belonged to the Methodist Church of Nadiad, Gujarat, all keen readers of this magazine, invited Duke to speak in the day-long youth retreat in a church that was well over 100 years old. Duke preached 3 terrific messages from the book of Galatians on telling topics such as Salvation, Sexual Purity and Soul-winning. Stressing the urgency of coming to Christ in the one life one had, Duke thundered the name of the movie, ZINDAGI NA MILEGI DOBARA ("You will not have this life to live again!") for the day of judgement is coming soon and there will be no chance of salvation then! On his way back to Hyderabad from Gujarat, God saved Duke from what could have been a fatal accident on August 16th, 2011! Earlier in the month, Duke lead the Galatians Book summary study at his base for Google Genners using the very name of the book as a short form following a fabulous time of intimacy with God during the time of worship lead by Preeti Iona and Fru Elvis.
Duke's apt, arrow-like message that connected the theme of honesty with the Gospel was aired in All India Radio this month 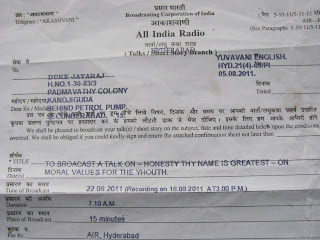 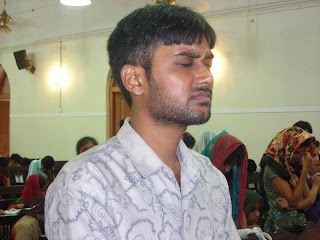 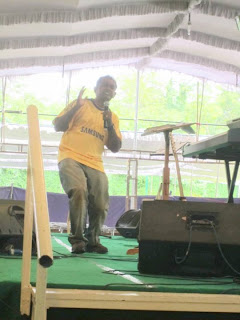 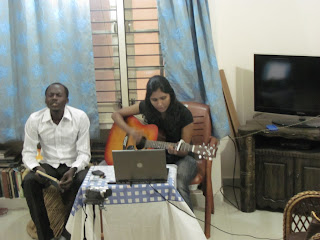 WHAT HAS OSAMA'S SUDDEN DEATH GOT TO WITH THE DAUND (MAHARASHTRA) AG YOUTH CAMP AND AN AG CHURCH IN VELLORE?

A brief May 2011 Ministry Report 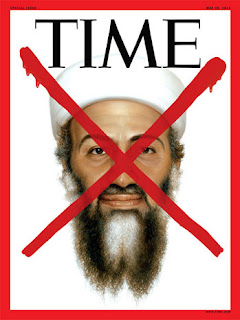 Osama Bin Laden was killed by the US forces on May 1, 2011 following a surprise attack. Duke Jeyaraj took this gripping contemporary event and wrapped it around the story of the Rich Fool found in Luke 12 and preached it to various audiences he got to speak to in the month of May. He did that when he preached in the Sunday Morning service of the Assembly of God church lead by Rev. S. A. Sundarraj in Vellore. He also did that in the Duand Emmanuel Assemblies of God Youth Camp where young people from Maharashtra and Gujarat were present in one of the 5 piercing messages he preached. Duke's wife, Evan, also had a story about Osama's wife which she connected to a spiritual truth in her message about staying pure in the same camp. She also preached 3 other very practical, powerful, messages. Tears of repentance and joy in the Holy Spirit, marked the times the youngsters spent at the altar. It was indeed a joy to see young people saved, filled with the Spirit, vow to live holy, and commit for ministry in this truly wonderful youth camp for which Rev. Nana Dhar and his son, Pastor Steven Dar had lovingly invited Duke and his wife to minister. Duke shared God's Word, a word of encouragement and edification, in the church lead by Rev. Austin Carter Jones and his wife, Pastor Jothi, in Chennai, full of corporate professionals and college students, on the last Sunday of the month of May. After having finished summarizing all the 39 books of the Old Testament via small group Bible Studies, Duke crossed over to the New Testament and lead a practical summary study of the book of Romans in his Hyderabad Base one Sunday evening which revived a small group of Google Genners. 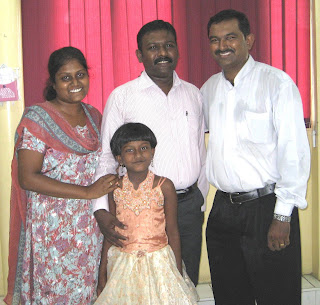 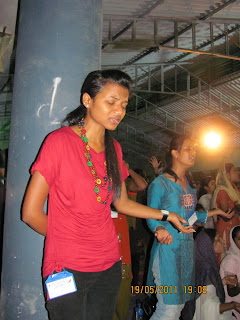 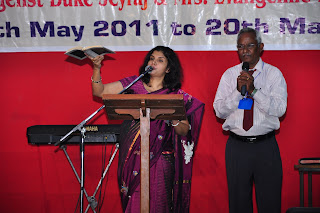 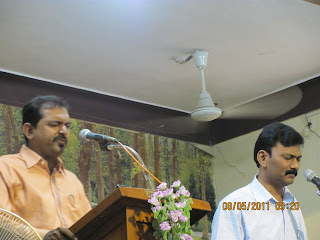 WHAT HAS INDIA'S WORLD CUP WIN TO DO WITH DUKE'S HYDERABAD BASE, CHENNAI SRM COLLEGE & 2 VELLORE CHURCHES? 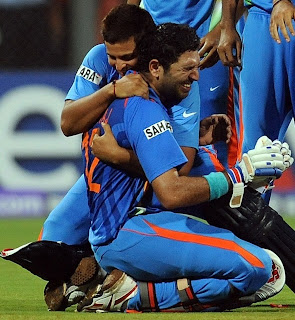 India became the first country in the World to win the Cricket World Cup on home soil in April 2011. It was a deeply emotional and an unforgettable moment for millions of Indians. Following Jesus' example in Luke 13:1-5 of wrapping spiritual truths around contemporary events, Duke Jeyaraj, shared Bible Truths from India's World Cup with the following groups in the month of April: (a) a small group of working professionals (from Dell, GE, Deloitte, Google, etc) in his Hyderabad base (April 3rd), (b) 800 students of SRM College, Chennai, (c) the Sunday morning service of the Zion Pentecostal Church, Vellore, lead by Pastor Immanuel Paul (April 11th) and (d) in the Sunday evening service of the Apostolic Fellowship Tabernacle, Vellore, lead by Pastor Collin D'Cruz (April 11th). The hearers were greatly challenged and immensely blessed. Some non-believers and backsliders came back to the Lord. The church pastors deeply appreciated the Word preached. What Duke shared was converted into a DVD with Joel Joseph drafting the cover design. On March 31st and on April 30th, Duke lead a month-end mid-night prayer meeting in his Hyderabad base. A small group from various backgrounds entered the new month in God's presence. Duke encouraged those who came with a short, stirring message from the Bible. The title of one message was "What We Need To For God To Meet All Our Needs" (from Philippians 4). 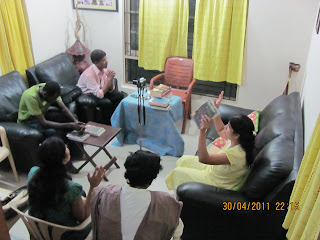 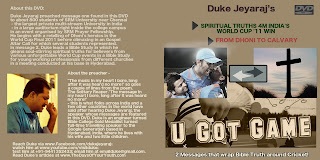 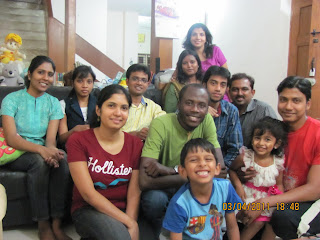 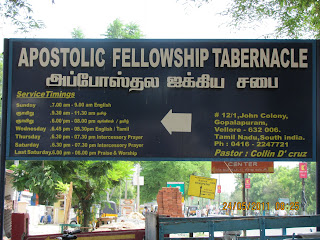