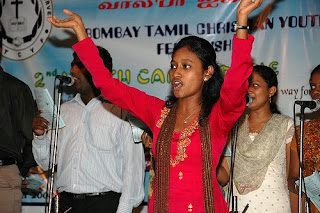 During the singing time at the BTCYF Youth Camp at Pune.... 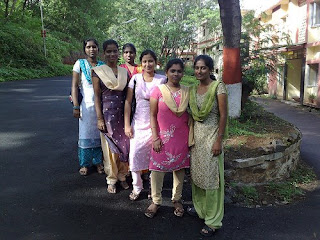 Some of the young women who attended the BTCYF Youth Camp at UBS, Pune, in which Duke and Evan preached in. 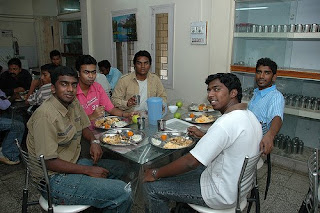 After being feed by the Word of God preached to them by Duke and Evan, some of the campers of the BTCYF Youth Camp at UBS, Pune, taste physical food! 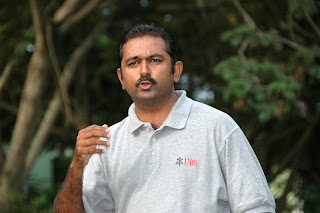 Duke makes a point while preaching in the Sandhya Session of the BTCYF Camp at Pune from Genesis 39. "The broom temptation came before the bed temptation for Joseph!" he said. 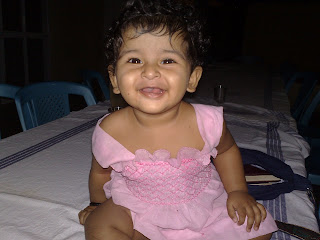 Duke's daughter joined Duke and Evan when they ministered to youth at the UBS Campus in Pune. Here she is snapped by one camera! 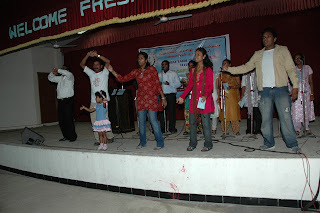 Using G-Talk for God Talk!
We continue to counsel and offer spiritual help to youth who seek that sort of help, through one on one meetings and through counseling e-mails. One young person heard what God's word had to say about Boy-Girl physical intimacy before marriage during one such session. Using G-Talk Duke gave Bible counsel to a young man in England!

Seeing a CD as a missionary!
The DVDs and MP3 CDs featuring Duke's messages to modern youth have now traveled to countries such as the United States, United Arab Emirates, Australia, Republic of Slovenia, Singapore, Malaysia apart from India. We see each CD as a missionary carrying Yahweh's Word being made relevant for the yahoo youth to different locations in this planet. 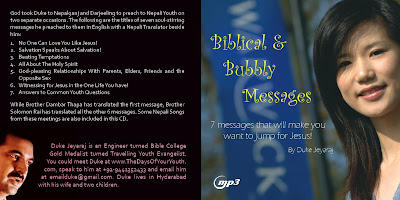 Missionary Journey in a train!
We still keep handing out to interested co-passengers Duke's Gospel tract for modern youth, Bubbly Outside, Yet Empty Inside? during our train journeys. Emmanuel, an Ethiopian student joined Duke to do this during our journey from Hyderabad to Bangalore train journey.

Prayer goes on without Duke!
In HSBC, where Duke works, the midnight 3-minute fellowship continues. Duke was happy to see the prayer going on even when he could not join it. God has raised other leaders to continue it even without his physical presence! The Lord helped Duke excel in his work in HSBC. He was one of the three people awarded a bonus of nearly Rs.10,000 by the management for his excellent performance in April 2008. Daring young people to be like Daniel in their place of work remains our passion and priority.

Thank you for your support and supplication. We value it very much. We have miles to go and many promises to keep before we sleep.

YOUR ENCOURAGING E-MAILS AND SOUL-STIRRING SMSes

Hello Brother Duke,
I was one of the guys who attended your classes in the AG's office yesterday. It was a great class.Your enthusiasm passed on to us actually. I was fasting and praying to the Lord that that the day should be a blessing to me and He answered me by sending you to teach us. - Chandrashekar. M, Hyderabad


Dear Duke,
This to thank you for the good overview you had taken the group (at the home of Daniel-Magdalene) on Isaiah within a short span. Indeed, I have been personally encouraged to take in depth study on Isaiah.
- Peter Prince, With Hewlett Packard, Hyderabad.

Dear Brother,
I received you magazine. Thanks a lot. It really helped me a lot in my life and its always encouraging to me.
- Kunjini Dumjan, Darjeeling.


Dear Duke, Thanks for the mail and for the magazine. The contents have been brilliantly put in the light of Gods word.
- Philip Samuel, Hyderabad

Dear Duke,
First of all I would like you to know that its a blessing to receive your mails.I feel privileged when you send the updates and ask us to pray. I feel we all are a team. I really appreciate all that you are doing.
- Shanthi Dasari, Hyderabad

Duke Annan,
Thanks a lot for your article on beating sexual temptation. It is a great help for comprehension and practical use. May the Lord use you to write many more such articles
– A young pastor


Duke,
Yesterday I watched your DVD (featuring the messages, "The God Who Kisses Can Kill Too" and "The Day of Judgment"). It was awesome. It spoke to me.
– A young woman

Dear Duke,
May the Lord enrich your two lives as you press on in partnership of obedience to the Lord! Your poetry is beautiful! Glad to hear from you
- Dr. Samuel Kamaleson,Founder FMPB and World Renowned Preacher

If you would like to receive encouraging emails from Duke Jeyaraj. Please write to him at emailduke@gmail.com.
--
Meet Duke at the web at www.TheDaysOfYourYouth.com - a site in which you will find Bible-life truths wrapped crisply and creatively around contemporary events of interest!

See how Jesus rides on the back of donkey Duke to various places at www.G-4Mission.blogspot.com, a website that provides picturesque reports on the ministry Duke does and the ministry products like message CDs that Duke creates!

Read Duke articles that present the Gospel to the Google Generation creatively wrapped around modern events at www.PurposeSpot.Blogspot.com