A JANUARY OF EXPANDING GOD'S TERRITORY

The first month of the year 2010 is over and the Lord has been very good to us. The year began with an surprise opportunity to pray before 7000 people of the New Life AG Church, Hyderabad on 1 January 2010, along with other distinguished people.

This month, the blessed our WRITING ministry. The 20th issue of our mag, The Days... rolled out of the press and was posted. Sanjeev Almeida and Esther Pranuthi helped us to do that. We received testimonies about how this particular issue was a blessing. The lead article on Ruth by yours truly, truly made youth think 'hatke' when it came to their life partner choice. We are working on Issue 21 which should be out by end of this month.We thank God for our tireless team of selfless volunteers. 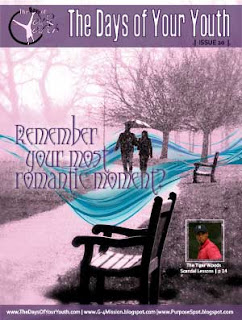 The cover for our issue 20 of our mag, The Days.... The lead article on Ruth challenged youth to think 'hatke' when it came to choosing their life partners

This month, we re-printed our tract, Bubby Outside, Yet Empty Inside. We included updated stories, like the one on the Indian Yahoo Engineer who worked in the US, Devan, who committed suicide after shooting most of his family, last year, in this tract that was first printed in xerox format in 2001. We included a picture in all the four pages to make it more attractive and we have started distributing it too. We distributed in our train journey from Vijayawada, the other day.

Light of Life Mag, carried my article on the importance of early-rising in its January issue. This magazine goes to about 20,000 people across the globe.

In the PREACHING front... I preached in four meetings this month. On January 3, I summarized in a practical way, the message of the book of Ezra using his full name as an acronym in a meeting at our Kanajiguda base. On January 6, I spoke in funeral prayer meeting in Yapral, near home. It was a service held in the honor of a 40 year old drunk who became a believer just before he passed away. Interestingly he named his little son, Steve Waugh. I reeled off my favorite Steve Waugh stories ('Son you've dropped the World Cup' story was one) in the message and called for a commitment to Christ, before it becomes too late. And the crowd responded. On January 14, I spoke for the first time in a meeting organised by Universal Baptist Church in Bhaglingampally in Hyderabad. 70 seasoned, influential folk, including a senior police officer attended. I spoke on the topic: The Call To Be Like Paul: Imitating The Fully Human Man Who Imitated Christ! I used the full name of Paul, Saul Paul, to outline his character for us to copy. On the 31 January, in our base, I lead a thanksgiving prayer for what God did in January and preached a promise message from Ezekiel 34:11-16. History was created as folks from corporates such as Dell, Delloitte, Genpact and folks from four different churches, and folks from all agegroups attended in that meeting from midnight 11 pm to 1 am (running into Feb 1). 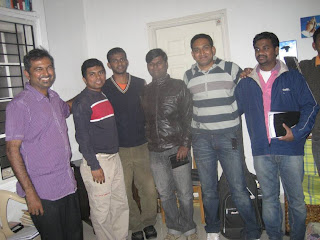 The scene after the first month end corporates midnight prayer at our Kanajiguda Base. Youth working in Dell, Delloitte and Genpact were there
In fact, I said 'no' to a number of preaching invites this month, the reason being I had to complete my assignments for Doctor of Ministry Course with Southern Asia Bible College. I even said 'no' to an invite from the largest church in India! God is good. He keeps opening the doors. I went for an one day retreat to a park by a lake in Hyderabad as part of one of my assignment. And it was unforgettable experience that brought me closer to the Lord!

In the message CD front, we could release a number of DVD messages this month including the message I preached to 1300 youth from all over India in the New Life AG Church, Chennai in the National AG Youth Conference for the benefit of the google generation. I want to see the google generation go gaga over God's Word! Ruby Evangel, living in New York State, Theo, living in Hyderabad, did the cover designs, so very well.

The DVD features Duke's stirring message to 1300 youth from all over India in the National AG Youth Conference in Chennai. The cover for this DVD was designed by our ministry volunteer, Ruby Evangel Chandrasekar

In the COUNSELLING front, we were able to have young people come to our home regularly even this month opening their lives to us to receive biblical, practical counsel. We have opened an id marryabeliever@gmail.com where in we send the marriage profiles we have so far received to help youth find believer life partners. We would give the password for those who specifically ask and keep changing the password.

God willing, I speak in New Delhi, twice in the month of Feb (13th in the church lead by Pastor Y D Jeyaseelan and 26 in a meeting organised by Brother Prakash James) in two meetings organised by two different groups. Please pray. I return to Delhi, where my wife and I first went to live after we got married, after almost 9 years! On Feb 19, I will speak in the AG Church in Vizag lead by Pastor Ashirwad who in turn reports to Pastor Chaitanya my roommate in SABC.

The next practical summary Bible Book study will be on the 7 Feb at our base. We will take up the book of Nehemiah. This would be a 'corporates special' study. Nehemiah is such an awesome example for corporates in the area of what they can do for the Lord during their 'offs'. 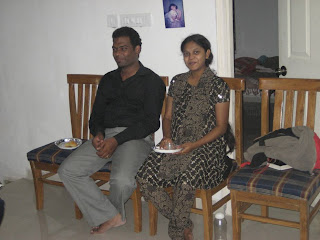 An young couple who attended the monthly Bible Book Summary at our base
We will have our next month-end late-night prayer at 11 pm on the 28 Feb at our base.
As a family, we are doing fine. The children enjoy good health. Go to facebook.com/dukejeyaraj to have a look at is happening in our world thro pictures.